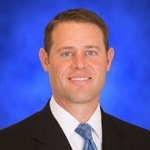 After graduating from the business school at Washington State University in 1993 with emphasized studies in Finance and Accounting, Kurt immediately began his career in the financial services industry. He was part of Pacific Capital’s founding group in 1998, and subsequently purchased the firm from its founder in 2000. Today, he is the Chief Executive Officer.

Kurt began his career in management in 1995 after a successful start to building his financial planning practice and has won an International Management Award from GAMA (the management association to the financial services industry) every year since 1998. Pacific Capital as a firm is in GAMA’s Diamond category, which is the top production category GAMA recognizes for its member firms. As the President of Pacific Capital, Kurt accepted the Chairman’s Trophy awarded to Pacific Capital by Penn Mutual in 2003. Kurt’s prior Penn Mutual awards include Silver Medal Sales Manager for 1998, Gold Medal Sales Manager for 1999 and 2000. After 20 years in the industry and many awards for production and management excellence, the award Kurt is most proud of is the Maury Stewart Leadership Award given to him by The Penn Mutual Life Insurance Company in 2010 for Leadership Excellence. To date, Kurt is the only recipient of this prestigious award.

As a producer for Pacific Capital, Kurt has been recognized as a leading producer having earned Penn Mutual’s Royal Blue Club in multiple years and is a Million Dollar Round Table qualifier.

Kurt earned the Chartered Financial Consultant’s designation in 1998 and the Chartered Life Underwriter designation 1999 from The American College of Bryn Mawr, Pennsylvania. He became a Certified Financial Planner in 2000. He is an Investment Adviser Representative of Hornor, Townsend and Kent, LLC and Advisory Resource Group, LLC, a Registered Investment Adviser registered solely in the state of Washington. Kurt is also a Registered Representative of HTK.

Over the years, he has developed two other related companies: Advisory Resource Group, LLC is a state registered Investment Advisory firm, and Corporate Benefits Group, LLC consists of a team of benefits specialists who concentrate their efforts in the benefits market.

Kurt is married and the proud father of three daughters and a son: Rachel, Anna, Christina, and Easton.

Certified Financial Planner Board of Standards Inc. owns the certification marks CFP®, CERTIFIED FINANCIAL PLANNER™, and federally registered CFP (with flame design) in the U.S., which it awards to individuals who successfully complete CFP Board's initial and ongoing certification requirements.